And Then There Were Ten

I've been a fan of Agatha Christie's books since childhood, and have written up a Top Ten list of her books for Tender Leaves, as part of their "Must Read" section. Here's the list.

at 11:04 AM 3 comments
Email ThisBlogThis!Share to TwitterShare to FacebookShare to Pinterest
Tags: books, reading, writings 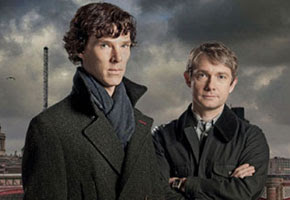 It was Tejaswi who first mentioned the words to me. They have never failed to inspire trepidation in me. "Sherlock Holmes Adaptation" - I'd rather face Col. Moran with only a feather for defence. He qualified it by saying it was a rather "creative adaptation" and that he was "happy". That, and the fact that Steven Moffat was involved in the writing, calmed the nerves a bit.

The venerable Holmes has been portrayed on TV and the DD generation knows well the Sunday morning series starring Jeremy Brett. The Holmes enthusiasts among us have the books, are steeped in trivia, and have enjoyed the references in pop culture(such as "House MD", which often drops many an allusion for the discerning fan to drool over, or Neil Gaiman's absolutely mindblowing short story "A Study in Emerald"). Beyond this, we never felt the need for anything more.

Especially with the manic Guy Ritchie film version a couple of years ago. I haven't seen it (lack of courage, mostly), but I have had it contemptuously described as "Holmes for the Americans" (ouch). But Moffat wrote (and brilliantly at that) "Coupling" - the FRIENDS -like sitcom that you can openly admit to enjoying even in your late-20s. So here was reason to look forward to "Sherlock" (no "Holmes", my dear W).

More recommendations followed (from Ajay and Keya) and so the game was afoot. I watched it last year, and was quite "happy" too. It's a bunch of surprises, right from the first episode (the wonderfully titled "A Study in Pink"). There was a lot of reference-dropping (for the fan) but a lot of plot as well. The writing (Moffat, Mark Gattis, and Stephen Thompson wrote one episode each) is unencumbered by the weight of what it is trying to be - a truly modern adaptation of a character that is more than a hundred years old.

The immediate reason for this post is to bring to your attention the fact that these three Sherlock episodes will be aired in India for the first ever time (see end of post for details). In the great British TV tradition, only a limited number of stories per season were filmed, but each is 1:30 hours long. I don't want to spoil your pleasure, so I won't tell you what I thought of episodes 2 and 3, but will mention that "A Study in Pink" was satisfying, even as a detective puzzle. Rich in texture and well-portrayed by Benedict Cumberbatch ("Sherlock") and the familiar Martin Freeman ("The Office", the H2G2 film) as the blogging Doctor. Don't miss the beginning.

"Sherlock" will air on BBC Entertainment on Sat at 8 pm, with repeats at 2 am and 2 pm the next day.

Iyers around the World

Sleeping with the fishes

You have had a long day ascending the hills. You see the hotel-cum-safehouse approach. You begin to relax. You think you are safe.

You trust the bellhop with your bags. He leads you to the room. You walk in. It's quiet all around. You hand him a fiver. He leaves.

You make the mistake of plonking down on the comfy chair. Then you look at the bed. The towels are made in a familiar form. 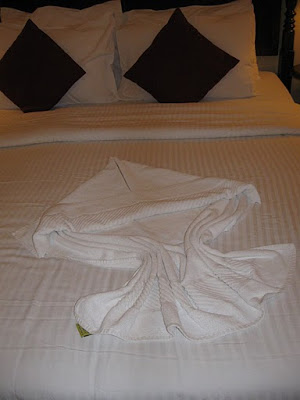 You recognise it instantly. The brief gulp of air that escapes your mouth isn't hidden from her. You explain about the towels; the fish on the bed. You wonder if you'll be sleeping with the fishes tonight.

The alarm on her face is unmistakeable. Yes, you have had a fatal dose of the movies.

Backs to the Future

The other day Harsh pointed out the immense increase in the numbers of pre-schools (and nurseries, unless they are all the same), measured purely by the number of vehicles carrying children to these pre-schools. This was further underlined by an ad in the ToI for an exhibition on pre-schools.

That's right. A pre-school Expo (termed "Future Kids" - which seems wrong. The kids are already present, aren't they?). Cars, real estate, pots and pans, handlooms, and even plant fibre have had such shows dedicated to them. But this is the first time I've heard of a pre-school expo.

Of course, children are going out of the house much earlier than their parents used to (some of their grandparents never even left the house). I'm sure that as a result, they will grow up to be better informed and more socially confident than us (err, than me). Kind of Virat Kohli vs. Venkatapathy Raju. There's no contest, really.

Calculating using the current rate of acceleration, by 2030, pre-schools will also begin offering IIT-JEE coaching. It's not that absurd - this is the land of Abhimanyu after all, and perhaps Kota's famed coaching classes will have auxiliary maternity rooms where the immortal words of Halliday and Resnick will echo throughout the day.

And remember kids, unlike in Abhimanyu's case, the answers to equations involving concentric circles will be available at the end of the book.