I liked what Cricinfo has turned their "Best of the Web" section into - a regular blog with RSS et al. Presenting The Surfer.
at 3:45 PM 0 comments
Email ThisBlogThis!Share to TwitterShare to FacebookShare to Pinterest

I noticed that recent instances of comment spam on blogs have had the following template:

The first part of the comment usually has a paragraph & headline from an online newspaper. The second half actually has the spam content (usually saying "what a great blog - check mine out at link").

This is interesting, for it continues to show what a game all this is - spammers thinking of newer ways to beat filters. Obviously here, they don't have to add random non-spam words (like they did before) to their content - probably the spam-fighters caught up with that. Instead, the random words are more cohesive, and relevant to that day. I guess they cottoned on to a pattern, where on many blogs that tend to be regular newstrackers, people would post links/extracts from a recent news piece.

Perhaps the idea to use here is to check relevance between comment and post (a very hard thing to do realistically - needs to be coupled with a whitelist etc). Meanwhile the easiest thing you could do on your blog is to see what additional services your blogging service provider has made for combating spam on your blogs, and to enable them.

[An example of such spam can be seen at Hirak's latest post (don't delete it, Hirak :-) ) . The lovely, but no doubt fictional, Adele talks about recent changes in the furniture business - the news item here (item happened about 4-5 days ago). ]

at 3:30 PM 0 comments
Email ThisBlogThis!Share to TwitterShare to FacebookShare to Pinterest

Just a day after I was expounding somewhere on how I was tired of blog-memes, comes this from Gaurav. The fact that I was supposed to be studying for an exam meant that my brain was more than unusually attuned to this latest diversion. I shut my eyes in order to make it go away, but some time later, the following emerged.

Omnipotence
"You switched it off?!"

"It was a mistake! - I'm sorry" came bubbling out among the tears.

She was a kid after all, sighed the Creator.

Points of light shimmered except in one gloomily dark area.
He switched the Sun back on.

Pausing after some of the steeper portions to catch my breath.

Yoo-hoo! Finally at the top.

Then off I jumped.

If you liked them, please leave comments - I could do with some ego-massaging now.

As for tagging others, I take the easy way out and do a global broadcast tag - please pick it up if you wish. I will make one specific tag - to Tejaswi - who's never been tagged before, so here ye go.

at 7:40 PM 0 comments
Email ThisBlogThis!Share to TwitterShare to FacebookShare to Pinterest
Tags: writings

[thought this would be the fastest way to mention this] - those who add me to your Google Talk list, thanks for doing so. I'm afraid I'm on Linux behind a firewall most of the times and haven't had the chance to try getting past it, and I have an ancient monolith running Win 98 at home, so right now there's no way I can actually use that service now. But let that not stop you from including me in. As Gaurav once mentioned in another context, right now, I have trouble catching up with the 21st century sometimes :-) When I do, I'll be e-vocalising.
at 9:59 PM 0 comments
Email ThisBlogThis!Share to TwitterShare to FacebookShare to Pinterest

An Introduction to the Principles of Porcine Aviation in England

"We have now successfully demonstrated how a member of the Sus Domesticus Airline can successfully take off. To recap, take 11 men in white {must include atleast one exceedingly beefy specimen}, all native {NOTE: the word "native" includes any member from neighbouring countries in a radius equalling the distance to the centre of the earth or with any evidence of commonly shared genes} and to get them to reduce another 11 to ashes.

Now a note on maintaining the flight (taking off is relatively easier). This will require another 11 {extensible to 14 over a period of 90 to 120/150 minutes} with one Scandinavian native on the side with fluctuating domestic life. To sustain flight altitude, they will need to get a leg past assorted men in blue, yellow and the rest of the colours of the rainbow. {NOTE: They must do this in the finals of the Finals}

It is very easy to land back on earth {the thud-degree depends on the amount of "hype" factor generated towards the end of flight}. We shall describe one such mechanism here. For flights in late June/early July, add any number of men/women/boys/girls/toddlers in white, on a fading green background {NOTE: To economise, simply fetch a person with the first name of "Tim"}. The landing can be delayed, but not avoided.

Thus ends our primer into what passengers affectionately call the "Swine Airline". We hope you have a pleasurable flight on the Oink 747s."

at 8:29 PM 1 comments
Email ThisBlogThis!Share to TwitterShare to FacebookShare to Pinterest

I'm sure Punekars would agree that the last 12 months have probably been the worst in terms of civic life in recent memory. Three essentials went bust at some point or other: water, electricity and roads [in case of the latter, well, the old joke about astronauts practising Moonwalks is still applicable].

What are the reasons? I don't know for sure. But I'd guess that it'd include "more people", "more vehicles" and "more blinkers". Tell me this: how can a civic body sanction three multi-storeyed buildings on a road like Senapati Bapat road which is sure to add about 1000 daily users to that area (they're mainly commercial/office complexes). The road is already saturated, so unless they're building subways or have a chopper service, I don't know how even a worm can move on that road. The head hurts just thinking about it.

My question is: how deep buried in the sands of neglect and internecine politics can civic bodies be to not notice similar signs in other cities and in their own? Has anybody tried to study the effects of extreme chronic water shortage in Madras, of power cuts and road problems in Bangalore and elsewhere? Heck, it was hard to figure out that all the excavation along University Road was for a flyover and not for T-Rex remains - not even a board came up (atleast the ones in Mumnbai had the courtesy to apologise, whatever little comfort that was).

So why not consider introducing CNG (or whatever alternative) following the lead of Delhi>? Why wait for the problem to get out of hand before making silly short-term panacea measures.

I'm really keen to see what happens in a place like Bangalore - but will Pune learn from anything that happens there? Frankly, Pune's just been exposed as a bit of an upstart, a one-hit wonder whose feted climate has been crippled by the pollution, whose roads have dissolved into gravel at the first downpour and never had any width to begin with to handle the explosion, and whose civic fathers are from one of those mawwkish TV serials where all they can do is abandon their responsibilities.

Is this even a price to consider paying for being an IT hub?

at 9:15 PM 0 comments
Email ThisBlogThis!Share to TwitterShare to FacebookShare to Pinterest

* The fact that I hardly saw even 100 deliveries in one of the great Test series in modern times. And missed Shane Warne busting his guts out for his team, desperate to leave on the same note in the same place that heralded him into the world of cricket. [It's good in a way that not too many people here seem to be following the Ashes - otherwise I'd feel the pinch even more]

* That Star World has waited until I've moved into a non-Star World zone to get Seinfeld on its channel.

at 9:05 PM 0 comments
Email ThisBlogThis!Share to TwitterShare to FacebookShare to Pinterest

Who stole my Saturday???

Calvin, you lucky dog.
at 4:05 PM 0 comments
Email ThisBlogThis!Share to TwitterShare to FacebookShare to Pinterest

And you wait with bated breath to see if the kid will break out into a wail or just get on.

at 1:59 PM 0 comments
Email ThisBlogThis!Share to TwitterShare to FacebookShare to Pinterest

The coolest GaNapati in these parts... 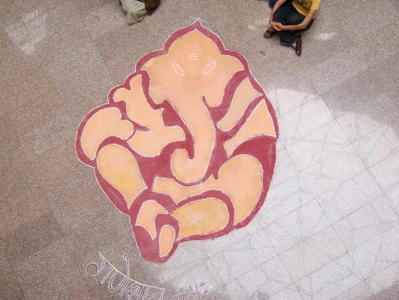 [Click to enlarge] {Put together by some really enthusiastic people here at KReSIT. I lent a tiny hand to proceedings as can be evinced from the S-t r e - t - c - - h...}
at 1:27 PM 0 comments
Email ThisBlogThis!Share to TwitterShare to FacebookShare to Pinterest
Newer Posts Older Posts Home
Subscribe to: Posts (Atom)