I had set these questions as part of a theme round at Abhimanyu 2011 (COEP's internal quiz). [update]
Answers have been posted in the comments.
at 4:09 PM 5 comments
Email ThisBlogThis!Share to TwitterShare to FacebookShare to Pinterest
Tags: chris_nolan, eng. films, movies, quizzing

Where Trolls come from

(not to mention their stand-bys)

If you've ever been beset by trolls, and wondered where they came from and conjectured it would have to be some kind of dark, stinky place, well, you might be right. 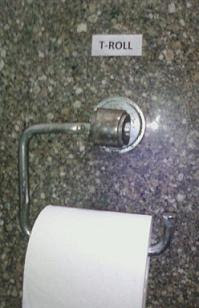 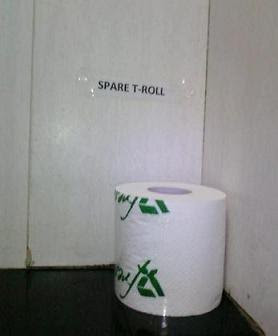 at 10:24 AM 1 comments
Email ThisBlogThis!Share to TwitterShare to FacebookShare to Pinterest
Tags: humour, images

I believe it was Mother's Day yesterday? Here's a story I wrote a couple of years ago.
~~Mother's Day~~
She woke up as if stung by a red ant. That abrupt start to the day was not at all unusual for her. Each day, it was always accompanied by a vague sense of dread: of overnight tasks forgotten, of three meals to cook, of the hypochondriac maid-servant, of the pressure cooker blowing up just as the schoolbus honked for the last time, just to spite her.

But not today. It was Mother's Day. She had forgotten to inform the poor alarm clock, who was the only one apart from her to uncomplainingly perform its unpleasant duties. She drooped back in a way she had not known in a decade. In fact she lowered herself as slowly as she could, savouring this rare chance. She sighed, turned to her side, and went back to sleep. It was only 5:45 A.M.

When she woke at 7, she opened her eyes and stared up at the ceiling. Her eyes, usually burdened under sleep and fatigue, had never been this wide open in a long time. She shrugged her sheets off and sat up. There was a mirror right opposite her. Usually, she would be terrified to look at her reflection, scared of what it would reveal about her. But today she had acquired the strength to stare back. Guided by the mirror, she fingered her black circles and smoothed her hair back. She was several dollars short of looking like a million bucks but today she felt great. On her way up.

She sat there for some more time. It stayed quiet. On the table beside the bed was her sole perfume bottle and three of her husband's deodorants. He always smelt artificial. She realised today that she didn't know any of his real smells. Strange. She knew the deos were empty, so she reached out for the perfume bottle and sprayed a little on her fingers. As she raised them to her nose, the phone in the living room began to ring. Her heart leapt but his voice asking her to pick that bloody thing did not come. Instead, the ringing stopped. Once again, she marvelled at the magic of Mother's Day.

What will I do today? she wondered. Of course, there was all that cleaning to do. But that could wait. What about a meal? Perhaps scrambled eggs? He never liked eggs, and the brats always demanded chocolate frosted cereals. But today she could have her own way.

She sat on the dinner table, swinging her legs as she bit into an apple. What will I do next? Should I take a vacation? Last night, her husband had told her exactly that - why don't you go somewhere? He had suggested her father's house. But that was so stereotypical. She tried to think of all those friends from college who now lived in places worth visiting. She wondered if Pushpa still lived in Dehradun. The hills might be a good place to lie low and have some time just to oneself. But it had been about seven years since she last corresponded with Pushpa, so this might be an imposition. Going home alone was fraught with the usual inconveniences: did you have a fight? are the boys better behaved these days? should you have come without the children? who is feeding them?

She found herself withdrawing into familiar whirlpools, so she leapt gently to the floor and vigorously shrugged her head. She needed to get cheerful, otherwise how would today be any different from yesterday? She decided to tackle the cutlery left by the sink. Washing the knives made her feel better. She inspected the edge of the big knife carefully - it definitely needed sharpening. Perhaps it was time to indulge in a new set - one of these which came with a resting block with slots that you could insert each knive into. She had seen photos of that in a mail order catalogue. The angle of the knives in the slots had reminded her of that famous photo of the Marines planting the flag at Iwo Jima. When she had made that droll observation to her husband, he said he didn't know what she was talking about.

The doorbell rang. She hesitated, partly hoping the ringing would be stopped, just like the telephone. But it did not. She grabbed an apron and wiped her hands on it. She walked to the front door, drawing the curtains that shielded the rest of the house. The 'eye-hole' showed her nearest neighbour holding a newspaper.

"Hello beta. You were busy?"

The neighbour thrust the daily out, chuckling.

"Oh, um, I don't think I heard the bell. Would you like to take the paper?"

"Uh, he is..., he and the children are planning to go somewhere in the morning. So I don't think he will have the time now. I'll send one of the boys to collect it in the afternoon."

"That is so nice of you." The neighbour looked intently at her. "Beta, have you cut your finger?"

They both looked at her left index finger which was wrapped in a brown stained cloth.

She smiled: "Oh nothing, just was peeling potatoes yesterday."

"Oh, poor girl. What you do is - to get rid of the stains on your dress I mean - you take some lemon - oh, there is your uncle calling - I think Mohan's call has come. These children go to America and they start celebrating all this Father-Mother day there and then think of their parents - and when they were here, they wouldn't bother about poor mummy at all. Ok beta, just send someone to pick up the paper later."

She shut the door and looked down at her dress. She'd have to get down to all that cleaning at some point. Might as well have a look and decide where to begin.

She drew the curtains open and walked into the big bedroom. It was a mess: clothes strewn around and her suitcase open, where her husband had tried to shout her into going away the next day. Also, there were ice-cream smears all over her favourite wall-hangings that her younger sister had made for her - the brats had fought over who would get the last scoop from the pack. But most of the stains were that of clotted blood, from the large knife wound in her husband's stomach and some from the slit necks of her two boys, who had blabbered in the last moments, the ice-cream melting away, adding to the mess.

Thankfully, the fragrance of musk from the deodorants was still in the air. Which now no longer belonged to her husband. She decided she liked the smell of Mother's Day.