Carrie, Stephen King's first ever novel, was the first book of his that I held in my hands. I returned it back to the school library after 20 pages. This is easy to understand if I reveal that I had been looking for books by Stephen Hawking. Exactly why the missing "Haw" did not attract my attention is unclear, but there was more slime than time in this brief history.

I never ventured into King-dom, not because of the mishap recounted above, but because I don't read horror. I like the movies though, so I read Rita Hayworth and the Shawshank Redemption, and after experiencing The Shining, I read about the Overlook. I wasn't too impressed. It was wordy, too long, and only occasionally did the hairs on my neck demand that I shut that book and try not too look outside at the blackboard night on whom someone was writing, slowly but with careful intent, my name in blood...

So it is strange that the first King book I've really liked is non-fictional. In On Writing, King takes a practitioner's view of writing. He feels blessed to be able to write and make money off it. He wouldn't probe that bit of magic too much. Instead, he makes sure he doesn't take it for granted and work at it like hell.

King begins with a brief autobiography - he thinks it would be good for me to know how some of that must have affected his work. He then constructs a toolbox for writing. It is suprisingly small (vocab and grammar on top, Strunk and White in the middle, organisation below). Just basic skills.

The last section is On Writing. If you had to read anything about writings, you should read this. He talks about themes, about the way he revises, about reading, about blocks, about ideas and flow. It works for him, but you don't have to do it that way. This section is written with great clarity and cohesion.

If I had to apply Strunk and White's mantra of "omit all unnecessary words", this post should read as:

Does that stapler come with jelly?

As a big fan of the TV series The Office (the American one), I had to notice that Staples now has a store in Pune close to my house. I wonder who they'll be putting out of business here. 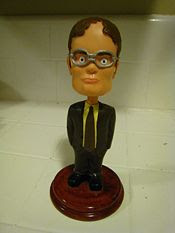 At any rate, it should be reasonably safe to go there since this fellow is unlikely to be "literally standing here in case you need anything".

Would you excuse me while I beat you up and steal your livelihood?

I have always maintained that Indians don't get irony. They are apt to feel insulted when it is pointed out to them. So I suppose there is no point in tapping the nearest MNS guy-bearing-brick that by rioting and generally terrorising the population at large, they are depriving fellow MaraaThiis of their livelihood. People who own shops, who rent out autos and taxis, who need to travel by local buses to make a living. "Go home, so that we can fight for your rights (and my right to be a right moron), or I'll break your head."

Nikhil Wagle may be shrill, but the guy has guts. Of all the people on all the news channels, he is the only one to do what he has been doing for a long while: dropping all pretence of pseudo-journalistic-fairness on a situation that demands none. He smells a conspiracy in what the local Congress and NCP govts are doing - letting the MNS steal the carpet from under the hapless Shiv Sena's feet. He also predicts Raj Thackeray is just the latest genie to be released out of the bottle. That the fair name of Maharashtrians has been sullied. The only one to loudly ask what Raj Thackeray has done in the four years since he began this so-called agitation. No representations to the Railway Board. It takes a certain culture to be democratic and the Thackeray household consciously leaves that out of the syllabus.

Finally, I notice that almost every bit of arson and rioting seems to be captured on video. I don't know if the rioters wait for the cameras to show up, or if there just are so many cameras around. A bit of both perhaps. So is it a good thing that people see every bit of this? Ordinarily, you think the publicity ("any" better than "none") would suit the MNS (arrested at 2:30 am, delayed court appearance, overnight jail). But would too much of it be counter-productive?

Finally, feel really sad for the poor chaps who came to Bombay despite knowing that people like them have been soft targets for several years. How desperate must the situation be at home? Sentence both Lalu and Raj T to one year's servitude to the family who lost their young son in this cross-fire. 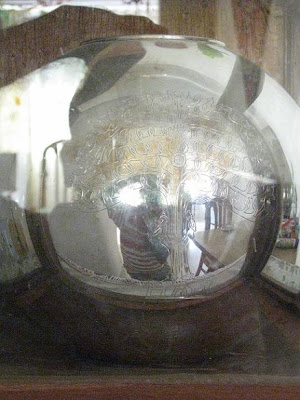 In obvious tribute to M.C.Escher: 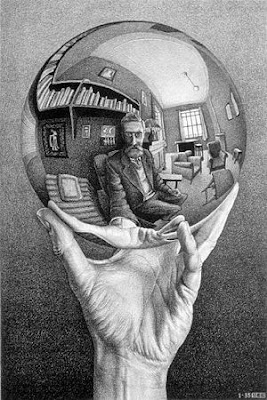 (Image source: Wikipedia)
(serendipitously, a chair was in the right part of the reflection)

Such are times that 'four' is no longer the fourth digit among the 'natural numbers' (fifth for all you geeks who prefer 'whole numbers').
These days "4" is "Two 2.0".
at 6:52 PM 2 comments
Email ThisBlogThis!Share to TwitterShare to FacebookShare to Pinterest
Tags: absur-ditties, humour
Newer Posts Older Posts Home
Subscribe to: Posts (Atom)