When you 'meet' someone for the first time over something as anti-septic as email, how much are you allowed to judge them? I seem to pay attention to their speed of response, their level of apology if they have taken time to reply, the attention they give your email's content (assuming you have taken every care not o intrude on their time and energy), and the thin line that divides curtness from concision.

However, the first time recipient of an email may not even be aware of being judged in this way. Being conscious that your writing styles evokes intangible qualities such as gentleness, enthusiasm, interest, annoyance, bite, and engagement would help. Eventually, treating one as you would expect to be treated by another is the easiest of thumb-rules to apply.

'tis "better to keep your mouth closed and be thought a fool than to open it and remove all doubt" said someone. Presumably, he was not a fool, or perhaps just brave enough to attempt using his mouth to make this utterance. But what of those who have opened their oral orifices, widely and gapingly, to show that there is truth in such an aphorism? Nothing happens to them. In fact, it might be profitable to be considered a fool.

So we think of cricket presenters and television anchors and stock market analysts and tweeters and radio jockeys as fools. They continue to prosper, write columns, get quoted, fill up frequencies, wallow in verbiage (such as this?).

While the meek inherit the world, the silent merely sit quietly. Where they are considered potential fool-material! 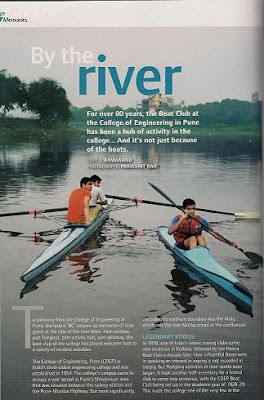 January's edition of "Jet Wings", Jet Airways' in-flight magazine, was a "City Secrets" special, and with newer people flooding into Pune each month, the presence of COEP's Boat Club may well be a secret for some of them. The BC isn't really a tourist haunt or 'a place to be' or (importantly), 'a place to be seen at'. In essence, it's 'a place to do', where "do" can range from boating to reading to performing to quizzing or just sitting.

I wrote a small piece on the BC, which appeared in this edition. You can read it online at the JetWings site (pages 63 to 66) or read a scanned version here (it's a .pdf file, ~1.3 MB).

Tomorrow is COEP's Annual Regatta, its 82nd edition (in step with the Oscars, as this trivially-minded author keeps reminding people). If you are not attending the BCQC March Open Quizzes (yes, that's how we get the BC in our name), you should attend the show in the evening!

(The magazine is produced by Spenta Multimedia; the photos for this article are by Parikshit Rao)

Abhay Deol's greatest talent in films, on the evidence of his seven releases so far, is by no means his acting. (He is what people call a 'sincere' actor - often a euphemism for 'tries hard, succeeds sometimes, and doesn't annoy', though he is getting noticeably better with each outing). Instead, his talent (and it's a rare one in our films) is that of making excellent choices. In turn, to reasonable film watchers, that means Abhay Deol is a very reliable recommendation engine, whose very presence in a movie signals that it is worth a watch.

Of course, crew-based recommendations is a matter of personal choice. For me, Christopher Nolan and Vishal Bhardwaj still remain the two other people whose mere association with a movie (as writers or directors) is sufficient to invest time and money in the result. What's interesting with Deol is that unlike Nolan or Vishal, he has very little control over the ultimate destiny of his films. Therefore, this uni-dimensional algorithm is likely to SEGFAULT ("crash", let's say, for you non-geeks) sooner than later. But seven interesting movies, with an eighth releasing tomorrow, is not a bad sequence to have.

1. Socha Na Tha: a romantic comedy that asked the question "what happens if a fellow falls in a love with a girl after he's gone to 'see her' and told everyone he doesn't like her". In his debut, Imtiaz Ali showed his penchant for finding unusual twists out of typical situations. Deol plays a rich kid with too many loves on his mind.

2. Ahistaa Ahistaa: Imtiaz Ali wrote this for friend and debutant Shivam Nair, the tale of a marriage witness-for-hire who takes care of a girl who's been stood up at the registrar's office. The unnecessary insertion of Himesh's songs (at an all time peak then) didn't help this little film.

3. Honeymoon Travels Pvt. Ltd: a bunch of tales so light that they escaped into the sky on release. The Abhay Deol-Minissha Lambaa segment was easily the most surreal. Anurag Kashyap turned Deol into the first ever Parsi superhero (spoiler alert, select to read!). Who would have thought?

4. Ek Chalis Ki Last Local: another variation on the "man falls into the night" theme, this time with lots of purple lungis thrown in. Funny without being special

5. Manorama Six Feet Under: In this Rajasthani version of Chinatown, Deol is mediocre at most things: writing, leading a family, even at being corrupt. A brave choice for a Hindi cinema leading man and probably the best film he's been in.

6. Oye Lucky! Lucky Oye!: a movie that had the colossal misfortune of being released the same week as India's most audacious terrorist attack. His most complex character, that of a loveless con artist, marked further progress.

7. Dev.D: in which he created the concept, played it with the haze, and even strapped on a camera. This film about a spoilt brat was ultimately spoilt because its writer-director found love. Drat.

Road, Movie is up next.

Today of course is Holi, a day for adults to do some fingerpainting of their own. There is hardly a non-contact version of the festival, no wall where you can guiltlessly fling paint at, as young 'uns do in a chic urban Hindi film in a slow motion sequence.

A year or two ago, I saw an interesting documentary on NDTV (their weekend documentary show is often worth a watch) which must centred around Holi and colours, I'm sure. It featured Ustad Sultan Khan who began singing "aaj rang hai" which, until then in my vast ignorance, I only knew as lines appearing in the Maqbool soundtrack's Jhin Min Jhini.

The same album has a longer version of the same song, which begins with "khusro rain suhaag ki, jaage pii ke sa.ng/tan mero man piyuu ko/dono bhaye ek ra.ng". The programme explained the Sufi concept of "rang", which is more than just the literal meaning of "colour". It refers to a kind of "luminescence" of God1, a divine colour, the oneness that the Sufi wants to achieve with his beloved Lord. Phrases like "mujhe rang de" are well known to us via Hindi film songs. In Sufi thought, there seems to be this treatment of the Lord and the devotee as beloveds, with the devotee seeking union with his God, which is why the use of romantic vocabulary of words like "prem", "suhaag", "piyaa".

Returning to "aaj rang hai", whose writer was (if you haven't guessed already) Amir Khusro. This post by Sheetal Vyas describes a popular version of the story behind the verses. Khusro meets Hazrat Nizammudin Aulia, and having found his mentor, is over the moon and runs home to tell his mother. So he writes:

Incidentally, looks like Gulzar who wove these verses in "Jhin Min Jhini" made another reference to Khusro in a song for "Saathiya" by using the phrase "nainaa milaaike". It's a coincidence that I watched Gulaal last week, but perhaps a separate post on it another day. Some more links
1. An article on Amir Khusro
2. A few Khusro poems (with translations)

1. I'm sure my interpretations are lacking in depth and meaning, since they are based on recollections of a TV show and half an evening's reading.
at 8:13 PM 6 comments
Email ThisBlogThis!Share to TwitterShare to FacebookShare to Pinterest
Tags: amir_khusro, gulzar, hindi films, language, maqbool, poetry
Newer Posts Older Posts Home
Subscribe to: Posts (Atom)