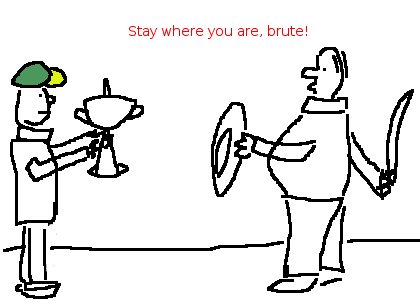 If a useful fallout of l'affaire Australia and the Pawar-play is to push for more elegant and quick post-match presentation ceremonies in the subcontinent, then I'd actually credit Martyn and Ponting with having served the game well. "Presentation parties" in the post-match hungamas here usually involve everyone who qualifies as an IP, if not as a VIP. So, you see every ward councillor and his third understudy craning to get their faces in the millions of photo frames (I used to think people like Rajeev Shukla made a living out of appearing on the "dais", such was their ubiquitous presence).

As a consequence. ceremonies went on for ever to the accompaniment of recalcitrant sound equipment (not that cricketers say anything apart from "I got good support from the other end" to commentators with a three-point agenda), and putting on a crude display which in contrast even Joginder movies could boast of better production values. Consider the chaotic 1996 World Cup ceremony in Lahore (an appropriate closing paranthesis to the famous laser-show opening fiasco in Calcutta) - hardly memorable from an aesthetic point of view. In sharp contrast, look at the tidy Wimbledon prize ceremonies or the European Champions Trophy presentations.

It's a whine to say this again, but the Aussies have this one usually right. Post-match ops just feature a representative of the sponsors, the local cricket big-wigs and the players to be felicitated. Here the politician is also the cricket big-wig, and usually has an accompanying votebank to boot, which must be appeased. The result is a greasy and claustrophobic experience.

I was surprised with the fact tht rameez raja didnt announce for the trophy to be given to the winning team...this is not a justification to wht the aussies did, but it would have been mush better had it been announced and done with!