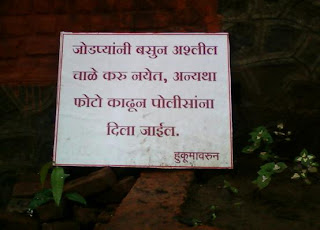 Such notices can be seen all around Chaturshringi Temple in Pune. Roughly translated:

Couples should not sit and indulge in indecent activities; otherwise they will be photographed and the photos will be handed over to the police.
By Order

Obviously, I have failed to capture the 'snappiness' of the original lines.

It's hard to say if there were sincere volunteers, armed with a camera, lurking around in the bushes, waiting for a chance to spring upon amorous pairs. It's easy to ask what I was doing there in the first place, but I shall not dignify that with an answer.

at 7:37 PM
Email ThisBlogThis!Share to TwitterShare to FacebookShare to Pinterest
Tags: language, pune

It does not explicitly say 'do not to make out' on temple premises, only that the Pune police will be ogling at the pics. God will be the judge of that. The rest will be judged by the Pune police.

But who are these concerned people? Why don't they put their names instead of going hukumvaroon?

Were you there,perhaps armed with aforementioned camera?..If so, one is pained, but if not, the mind boggles with confusion, and I must pause to regain my composure :D

Submit it to Puneri Patya: http://www.busybeescorp.com/puneripatya/