Alain de Botton and "The Pleasures and Sorrows of Work"

That I am a little reluctant to describe Alain de Botton as a modern philosopher probably reflects more on my self-image and the image I want to portray to the world. In this post, I will be describing a book of his that I quite enjoyed and since, in the minds of my friends, modern-age philosophy is often bolted to the shelf of professionally vague self-help bestsellers, I worry about what they may think. 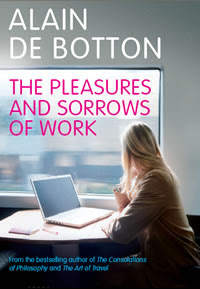 But Alain de Botton himself (or rather his website) comes to the rescue, describing him as "a writer of essayistic books that have been described as a 'philosophy of everyday life.'". That's a reasonable description. de Botton is not a prescriptive writer, but one who seems to possess both the leisure as well as a unintrusive acumen to write about us humans and the worlds we inhabit. Without telling us what to do next.

I heard of de Botton via Dhammo (thus giving me a chance to pay the favour back). I first read "The Architecture of Happiness", a quaint book about different spaces of the constructed variety, lowly office buildings and grand cathedrals alike. But this post is about "The Pleasures and Sorrows of Work".

Perhaps I am taking the easy way out, but I don't have as much to say as much as I have to quote from the book. We spend a significant portion of our adult lives at "work", says de Botton, but we don't discuss it very much. This is perhaps not so true any more - blogs and tweets are devoted to dissecting our work-lives in detail or making throwaway comments during the day; but it is true that we do not compare our experience across professions: art curators do not break commiserative bread with brain surgeons, cricket umpires do not swap notes with database administrators.

Apart from being a lurking presence during the day and a quiescent ghost in the hours between work, what is so special about work? Our ancestors (including our parents) probably never made so much of it, the way we charge so much of our potential happiness to it.

"...the most remarkable feature of the modern working world may in the end be internal, consisting in an aspect of our mentalities: in the widely held belief that our work should make us happy."

In the book, de Botton follows people to work, talks to a wide variety of people going about their daily business, observes, and makes conjectures, even about himself. It is fascinating, an unexpected kind of voyeurism, watching rocket scientists prepare for a routine launch, shaking your head at a power engineer whose weekend hobby is to trace the paths of power lines, ride up and down elevators with business consultants. Satisfyingly (and sadistically), their lives are as interesting (or boring) as ours.

Perhaps the most interesting and poignant encounter is with a career counselor. He deals with mid-career clients who can no longer keep up the facade of knowing what they want to do and students about to plunge into the depths that plague all of us, while dealing with his own professional anxieties. Like a dentist with a vague sense of dread about the pain in his molars.

de Botton notices that the counselor has a notice pinned to a door containing:

"a quote from Motivation and Personality, by the psychologist Abraham Maslow [...]: 'It isn’t normal to know what we want. It is a rare and difficult psychological achievement.'"

He observes the counselor helping a woman deal with the attempt to discover what she really "wants to do" (familiar question at any age?), by attempting cathartic writing sessions not just about what these people like, but also what they envy. What else can you do in that short span of time, in the rapidly falling sunlight of life?

A de B takes an aptitude test; when its results come back:

"I recognized my desire to submit to the report’s conclusions in the hope of quelling my doubts about my future. At the same time, the report failed to inspire any real degree of confidence and indeed, the more I dwelt on it, the more it seemed to signal some of the limits of career counseling as a while.

It struck me a strange and regrettable that in our society something as prospectively life-altering as the determination of a person’s vocation had for the most part been abandoned to marginalized therapists practicing their trade from garden extensions. What should have been one of the most admired professions on earth was struggling to attain the status open to a travel agent.

But perhaps this neglect was only an appropriate reflection of how little therapists can in the end make sense of human nature."

He ends the book by noting that “If we could witness the eventual fate of every one of our projects, we would have no choice but to succumb to immediate paralysis." However,

"Our work will at least have distracted us, it will have provided a perfect bubble in which to invest our hopes for perfection, it will have focused our immeasurable anxieties on a relatively small-scale and achievable goals, it will have given us a sense of mastery, it will have made us respectably tired, it will have put food on the table. It will have kept us out of greater trouble."

You are the second person to mention A de B in less than two weeks. I should take that as a sign.
*
Though, I think people would be more willing to talk about what they did if someone took more interest, or dug deeper. Often we assume that our work couldn't possibly interest anybody else, or outside our profession that we rarely break break over something that we spend most of out time doing.

I read his "How Proust can change your life" last month... Interesting read... I related to his difficulties measuring up to his father who was also a physician... Will definitely read some of A de B's books on work, travel, usw