"The Myths of Innovation" by Scott Berkun (O'Reilly Media)

Scott Berkun is an author and blogger, a former Microsoft man. I began reading his blog a couple of years ago, and have found most of his posts interesting and even provocative. In fact, he makes a point of being strident in his views about management, public speaking, and thinking. 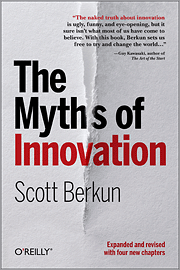 "Myths of Innovation" is his second book (the first was about project management, and the third is about public speaking). Ordinarily, I'm wary of anything with the I-word in the title because most people use "innovation" to indicate a vague sense of novelty and as synonyms for invention or creativity. They've either never thought what they mean by it or use it just like they use most other verbose polysyllabic words. However, Berkun has often suggested that perhaps it would be good (for our collective mental health no doubt) if people could stop using the word "innovation", I was reasonably sure of being spared the fertiliser.

I'm not saying that the expressed need for (more) innovation is hollow or just a fad. Most industries and societies at some point in their lifecycles need to change (indeed, are compelled to), in order to survive, flourish, grow, or just to avoid dying of boredom. Doing new and useful things is immensely challenging and interesting, and some people are going to be very inclined to try their hand at it. If they are also of the reading type, then "The Myths of Innovation" will be a useful book for them.

These myths are obviously not in the mould of hand-me-down stories. They are better understood as being assumptions, unspoken ideas that take insidious home in minds. Take, for instance, the idea that some of history's greatest inventors were hermits, working in wooden cottages bouncing ideas off the house cat. Okay, not so much that, but the notion of the solitary innovator, having to single-handedly fight off the status quo, has always been great material for long-lived stories and trivia questions. Any reading of history easily debunks many of these stories. Edison, the archetypal inventor, had an army of researchers and technologists. Steve Jobs, innovator extraordinaire, needed to find his Woz, his Ive, and many more. Yes, they had to fight the proverbial systems, but they had cohorts. The revision history of any innovation, to use a software engineering term, will show the grubby fingerprints of many, with several increments and roll-backs. One thing will be certain: the more the longevity of the innovation, the more it would have evolved and the more the people involved.

Berkun tackles this and other such myths, including some counter-intuitive ones such as "Innovation is always good". Anyone forced to listen to an annoying ring-tone in a public space would know that isn't quite true. The book is engaging (and well-referenced) with a variety of anecdotes and discussions, and there are no homilies.

Towards the end, moving away from the negative tone, the book turns into a checklist of various suggestions, "hacks" of interest to the creative innovator. Perhaps Berkun didn't want to limit the book to a list of things you shouldn't assume or avoid doing. It's by no means comprehensive, but useful nevertheless. He also encloses an excellent bibliography. Sure, you can spend time reading them all, but to me, the message of the book is that if you think you want to innovate, what you should do is: just go ahead.

I reviewed this book as part of O'Reilly's Blogger Review Program. This is the first time I've done so, and it was mostly motivated by being able to read this particular book for free. Sorry Scott :-)

at 8:20 AM
Email ThisBlogThis!Share to TwitterShare to FacebookShare to Pinterest
Tags: books, innovation_thoughts, reviews