Glimpses of a genius: Buster Keaton

It's a pity that many of us ("even I") haven't seen much of 'Buster' Keaton's work. He does appear in quizzes, usually for the origin of his nickname, or as the name you'd guess in case the answer "Chaplin" was wrong. 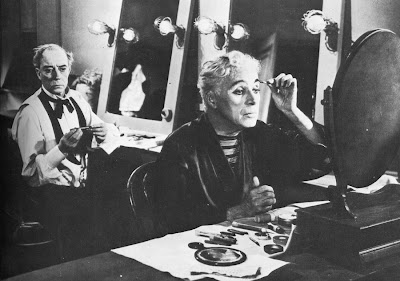 Kamalahassan refers to Keaton quite often in some of his interviews. My first film viewing of Keaton was, ironically, in Chaplin's brilliant "Limelight", where the two giants of the erstwhile silent comedy era came together for a memorable duet (youtube link). The magic of this partnership is that both are playing out their own styles of comedy in tandem.

I have also watched some parts of The General, perhaps the most famous Keaton film, and was able to watch all of that stupendously choreographed locomotive sequence. In fact, Keaton's films are like great magic shows or symphonies: exceptionally well-timed and intricately designed.

In an article on PFC, Shripriya writes about another Keaton stunner called "Sherlock Jr." and points to two astoundingly crafted sequences. Look very carefully at both of them: even after you know how they were put together, you will still be rubbing your eyes at the ingenuity of it all.

allow me to recommend The Navigator and Our Hospitality...