Once I could see, now I have been blinded

Those of us who grew up watching sterile DD newscasts could scarcely imagine news programmes would become so annoying in the 21st century. Progress was flying cars and teleportation, not a 24x7 itch.

My latest peeve concerns the tendency of news videos to come with bright red lassos or arrows that move in relation to the video. Originally used to point our attention in grainy videos, this visual annotation now appears in almost every other news report. It is very reminiscent of the times when a similar 'innovation was handed to cricket commentators to emphasise some vague point they wanted to make. Invariably, the pointer would slip resulting in some unholy scribbles that even parents of kindergarten kids would be loath to praise.

The problem arises when perfectly clear pictures are defaced by a circle or an arrow. The end result is like watching the victim of a laser pointer attack - the poor chap has no idea a red circle is following him all over the screen. Worse are animated arrows that repeatedly keep poking the object of its affection - reminds me of all those "fling a shoe at Bush" flash games that did the rounds a few weeks ago.

This last mentioned menace appeared in a Times Now news report this evening about Sachin Tendulkar's absence from the next cricket match thanks to injury. In addition to a caption saying Internal Bleeding, an arrow kept poking at Tendulkar's rib cage. Despite the fact that it's internal. That we can eventually see him grimacing and holding his stomach. Forget about leaving it to the imagination, I haven't lent my eyes to Crimemaster Gogo to play marbles with. Another prominent member of the sac-red circle has been Ramgopal Verma while touring the Taj.

These marks have the unpleasant side-effect of instantly bumping anyone inside the circle to the level of an alleged criminal. What other conclusion could any visiting alien (from however advanced a civilisation) come to about a person thus outlined, other than he was worse than a dreg of Plutonic moondust: why else would the red circle keenly keep him in its sights like a hunting dog? To illustrate my point, see this composite image of the best of Indian TV (I hope NDTV doesn't sue me for saying that!): fine, upstanding journalists, with intensity and intent to break news written all over. And then observe, milord, the same exhibits with outlines straight out of The Omen. 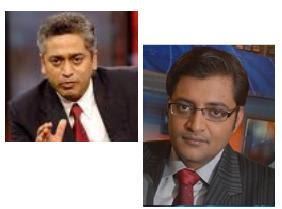 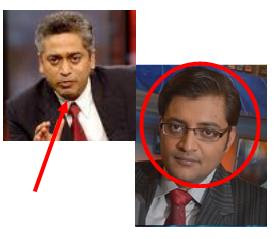 You begin to sense the malignant cursors compelling you to haul them in front of the Inquisition. Brr.

Watch Vinod Dua Live every night at 8 PM on NDTV India - the best news show. I also liked Prannoy Roy's show today where he took Jyotiraditya Scindia and your friend Sudheendra Kulkarni to task. If Roy is doing a Dua on NDTV 24x7, it will be the other show to watch - as long as he is doing it alone :)