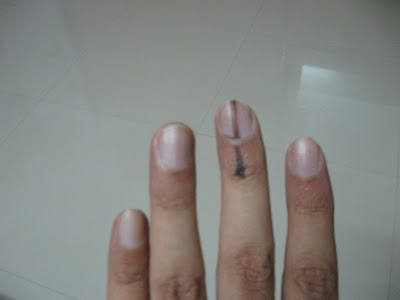 The most common election day talking point was how we pointed to our index finger just before pressing someone's button and they asked for our digitus impudicus instead. In addition to this digital revolution, the marking of our franchise status was a long vertical line as opposed to the heavy dot of the past. Why this change, I do not know, but it did make for interesting post-poll conversations.

"Did you vote?", they would ask. You could conveniently show them the middle finger in response. It was even better if they hadn't voted, for the gesture could serve as double entendre.

Notes 1: I am not a Simpson or Ekalavya; I do possess a fifth finger which also happens to be a thumb.
2: meaning "vote and show (the) finger"

Our CM shows the finger: http://epaper.timesofindia.com/Default/Scripting/ArticleWin.asp?From=Archive&Source=Page&Skin=ETNEW&BaseHref=ETM/2009/04/25&PageLabel=3&EntityId=Ar00303&ViewMode=HTML&GZ=T

In Karnataka, they robbed us the pleasure of showing "the finger" :( The conventional way of marking on the index finger continued. It was however a vertical line. (Maybe it is the tactics of the EC and ink manufacturing company to make more money)

well, there were local elections held recently, in which many people got the dot on the index finger. so, to avoid confusion, they decided to show us the middle finger this time around!!

:)) ooh ive gotta check out wht happens here...we get to vote on the 7th

all: Thanks for your comments.
Upasna: it seems this is true only in maharashtra and states like it where some local elections were held recently.

You're right, index finger it was in NCR.There was no time rule though

When I voted in 2004, there were 2 marks on 2 fingers one for the Assembly and one for the LS.
The officer makes sure you pressed the button on both the boxes. else only one mark is supposed to be entered.

The ink on the lower cuticle of the nail does not go without you seriously hurting yourself. Although the ink in indelible its certainly hide-able by applying enamel :D so lengthy mark is like a backup against people double voting.

Its really ironic that our national polls are being fought on local issues like traffic jams and water, with independents hogging all votes and still there is such a low turnout ... I guess India is truly united by not being united :D