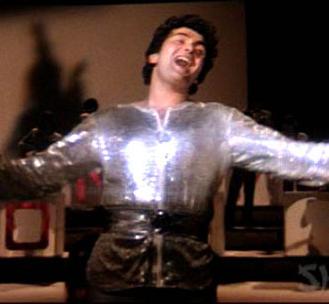 From The Language Log and The Guardian, a magnificent specimen of a 2008 'journal paper' about the sound that is "Om". Titled Time-Frequency Analysis of Chanting Sanskrit Divine Sound "OM" Mantra , the paper 'proves' that the mind is calm and peace to the human subject and its principal conclusion is that steadiness in the mind is achieved by chanting OM.

You will find a rousing (and ROTFL-ing) discussion of the paper's scientific content (or lack thereof) at The Language Log, which writes:

"The first step seems fair enough: ommmmmm chants are analyzed using standard transform techniques, that represent signals as superpositions of wavelet forms. The second step is… well, there is no second step."

"Perhaps the pictures mean more to the enlightened than they do to me. The article is so bad that I can't see it as anything other than a spoof. And the premise is amusing enough. But I don't know enough about the IJCSNS article genre to really get the joke. If there is one."

Given the details in the paper, I fear it isn't a parody. The original Guardian article (written by one of the organisers of the Ig Nobel prize) says:

"The important technical fact is that no matter what form of Om one chants at whatever speed, there is always a basic Omness to it."

"No one has explained the biophysical processes that underlie this fetching of calm and taking away of thoughts. Gurjar and Ladhake's time-frequency analysis is a tiny step along that hitherto little-taken branch of the path of enlightenment.

(I have no stand on the significance or lack thereof of "Om". But I do stand laughing at 'science' so bad that it seems to have emerged of Rajkumar Kohli's 'consciousness'.)

Scientific pot-shots apart, there are several linguistic gems (or maNiis, in keeping with the theme). Such as this runaway adverb-adjective train:

"Highly sensitive expressive experienced people are more probable to be satisfied and efficient in their life in recent days."

Or you could wonder at this buffet of a scripting language, a proposal, and a quest:

People have been heading for their gawk inwards in propose to attain peace of mind, since they are not capable to locate steadiness in the external world.

As a final point, we have confirmed scientifically the accomplishments of OM chanting in reducing the stress from the human mind.