I suppose reviewing a film about magic will inevitably call to mind Godard's famous "The cinema is truth 24 frames per second"1. Not that statement per se, but an inversion of it, that cinema is illusion at that very rate. The movies are magic after all, a collection of static moments pieced together. We have got used to the fantastic nature of it all, rendering it mundane, but a viewing of Christopher Nolan's "The Prestige" revived my fascination for what is after all in essence the newest trick in the book. 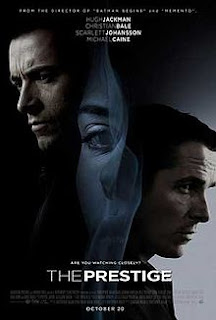 The Prestige, sourced by Christopher Priest's novel of the same name, tells of a duo of warring conjurers, tied together in a double-helix of fabulous proportions. Scarcely have they met each other as budding magic-men that their fates become inextricably linked, in a maze of tragic death, petty violence, and mean machinations. Robert Angier (Hugh Jackman), or "The Great Danton", is the more accomplished showman, while Alfred "The Professor" Borden (Christian Bale) is the better creator. Michael Caine as "Cutter" ties them and us together providing the third wall to this drama. Three women and a girl form the husk of the men, and make significant impacts on the story's progress.

Starting from Angier baying for Borden's blood after a trick gone horribly wrong (and worse, the unpardonable loss of memory) to either man fixating upon a mirage of magnum-opus proportions, each man is obsessed with the other (Caine steps aside remarking "obsession is a young man's game"). Each is prepared to bend the very boundaries of magic, even reaching into science for aid in their battle. The story is, after all, set at a time, when science was still fairly magical - the only difference from superstition being that someone could explain it. But scientists like Nikola Tesla were the archetypes of mystifying inventors, and so in a brilliant weave, Tesla (a very hard to recognise David Bowie) and his toolbox of physics are part of the plot.

Let us pause at this point and contemplate the nature of magic-as-illusion. Jonathan Creek fans will be familiar with the required elaborateness of the great tricks, which when explained, invites a massive haemorrhage of allure. Also, magic tricks are never pure magic: just like Holmes said (he'd have been around the same time as these men would have), that if you have exhausted the impossible, that which remains must be true, however improbable it may seem. Every street magician knows that every trick can be explained, which makes it worse for the professional. The member of the audience can go away shaking her head in disbelief, but the pro has to deconstruct it. And what if it defies analysis? What if the mundane explanation is too poor to dot the points?

Returning to the film, the story is revealed in three overlapping narratives, which are placed at different points in time. As far as non-linearity goes, habits hard die old given Nolan's vintage (even though he is only 5-and-a-little films old2). Two of these narratives are mirror images of each other: each man reads the diary of the other to fill in his blanks (and in a bit of routine cinemagic, we can see in full splendour what they wrote about!). The brothers Nolan never let you be overly aware of the three-balls-in-air they're pulling off here, and as some of the best tricks go, you never notice 'em. The narratives are also a nod to the fundamental three-part-formula of any good magic trick3. The story is set in the late 19th century as it turns to the new, during the "Golden Age of Magic" as it was known (JC fans would remember posters of Maskelyne and Devant in Jonathan's home), which is the best time for any story about it to be placed in.

What makes this film wonderful, apart from the great acting (as usual by a mostly non-American cast!), is the peeling apart of revelations. You expect a bunch of twists when Nolan isn't making caped-crusader movies, and you will not be disappointed here (if you were, as the tagline says, watching this closely). In fact, while watching it, we twigged as to what was happening roughly 30 minutes before the end. We therefore experienced the strange sensation of watching the rest of movie as if it were a second viewing, with "ah!"s at some of the hinted touches. Memorably, smaller events foretell larger ones, which will no doubt become crystal-clear on repeated viewings - the story is a frac-tale, if you will, in this regard.

Technically, the film is a delight. The elaborate sets and apparatus, the make-up, the costumes, the lighting, the cinematography (though our first overhead shot of the train to Colorado seemed to be out of the storyboard for "Batman Begins") are top-notch. As is the acting. After Nolan's segue into big-time Hollywood, this film also marks a reunion of sorts of the old gang: David Julyan who scored all of Nolan's films except for the big one, and brother Jonathan, last remembered with "Memento", co-working on the screenplay here. Of course, if you peer hard enough, you can nitpick to your heart's content. But just to get this much off the air is outstanding.

The movie seems to pretty much have no marketing whatsoever in India, if a tiny paper ad and one show in the 'plexes in Bombay is anything to go by. So, if my recommendations are worth anything, go watch this little beauty before it vanishes (the illusory puns are unavoidable!). The movie was worth a 45-min delay and projection goof-ups at the local-blot-on-the-name-of-multiplexes4.

And finally. To Nolan. I know you can't see me stand up and applaud now - it's a little like you taking your bows below stage. But I went into raptures when I "got it" (and that too only somewhat5) - truly, I was a kid in front of something magical; seldom have I enjoyed myself in a movie theatre like this before. I really wish you could have seen my face6 :-)

1: The reference must have seeped in from Jim Emerson's review of The Illusionist, the other film this year to feature a battle of wits, this time only with one magcian though, also set in the same time frame.
2: Keeps my record of having seen all of Nolan's features intact (Following, Memento, Insomnia, Batman Begins). Whither be Doodlebug?
3: Incidentally, Priest invented the pledge-turn-prestige terminology; it wasn't really trade lingo.
4: Huma Adlabs, Kanjur Marg, where no one but post-endsem IIT students go. Its biggest draw is that it is peacefully empty, so I shouldn't be complaining.
5: Or did I? The over-enthusiastic IMDB bulletin boards suggest several more possibilities than seemed necessary.
6: This last paragraph will make sense if you watch the film.
7: Image: Wikipedia
at 7:18 PM
Email ThisBlogThis!Share to TwitterShare to FacebookShare to Pinterest
Tags: chris_nolan, eng. films, films, reviews

But what touched me more - way way more; was Bale's character. And of course, the implications of the way in which Jackman's character brushes off the Chinese Magician's life. Boy!!!

And of course, did I love the movie? Yes, and not just today :)

The novel itself is divided into the narratives of the 2 magicians writing diaries and here agian we find interleaved stories...nolan seems to have picked a story that more suits his directing style i suppose...
and a good review it seems...must watch the film to see how faithfully nolan has stuck to the novel...will want to chk if some interesting parts are included in the movie...

The film is excellent, no doubt. Loved the way the secret to Borden's disappearing act is revealed and all in all was mighty impressed by the film-making. The way the great Danton goes about his act sends a chill down your spine. One thing that struck me though which caused the movie not to get a 100/100 from me is the fact that there has existed no machine/technique of the sort that was shown. Agreed that it's all fiction, but it made the plot weaker nonetheless in my opinion.

siddharth: true. It depends on how willing you are to make that extra "suspension of belief". From what I have read, the book goes a little further than what we see, so actually the film, IMO, makes this aspect a little more palatable. And as Jonathan Nolan says in an interview somewhere, of all the scientists around that time, Tesla was the one most maverick and dabbling in weird science, so Priest made a good choice.

Yeah, Tesla was the most happening inventor then. The lamp-bank connected through the ground was quite a sight.

shamanth: thanks! now only if youtube wasn't blocked here :-(