The Tamil Diwali - a SiNi-matic experience

Many people ask me why is it that the Tamil Diwali (or Deepavali as it's more likely to be called in the land) starts at 4 am with an oil bath and ends at 6 am after some crackers. This is not the case and I will attempt to undefame this (possibly North Indian) defamy. 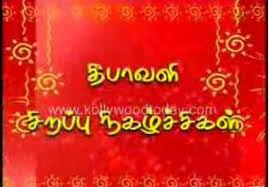 The simple and practical purpose behind getting your Diwali chores out of the way is so that we can indulge in the Sun TV Deepavali 'sirappu nigazhchigal' (i.e. 'special programmes', as you unentangle your Northie tongue after an ill-advised attempt to pronounzh that). In fact, some dispassionate but misguided anthropologists have even been led to believe that this communal partaking of the dawn-to-dusk Sun TV feast is the true essence of the Tamil Diwali. (Some rascally fellow has also submitted a thesis saying Naragasuraa, was misheard on his deathbed: he wanted us to do 'videos', not 'vedis'. This is just more defamy.)

In reality, this is how things unfold. A week before Diwali, Sun TV will begin announcing its line-up of this year's SiNis (Ed.: carpal-friendly abbr.; its similarity to "Cine" is purely coincidental).To make sure each and every viewer of Sun TV is able to by-heart the schedule, the kind souls in charge of programming will show this lineup every 15 minutes. This often means that the 9 pm nightly soap will start the next day at 6 am, instead of 10 pm the same day.

One of Sun TV's core beliefs is eternal consistency ( which is why they only recently began accepting the helio-centric theory of the solar system), so each year, the SiNi line-up is the same: 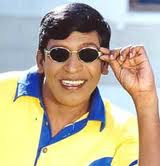 At this point, we will have one hour of the 'paTTi manDram'. 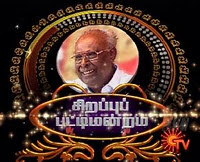 The 'paTTi maNDram' is literally 'the debate forum' in which several Tamil professors will humourously discuss serious topics such as: One hour of lively debate by the professors with humorous interruptions by the Chair (a gentleman called Solomon Pappaiah) ends with victory for the mother-in-law or the daughter-in-law (ever since records were kept, the scoreline has been 37-32 in favour of the m-i-ls). Just how wildly popular these debates are can be judged by shots of wild laughter from the audience in the debate hall (even after an ad break) and that the speakers and the Chair often get to have wild cameos in Rajnikanth films. (See example paTTi maNDram video

After such cerebral sparring, the rest of SiNis are:

Thanks to ndtv.com for broadcasting live a number of soap(s) starring Sun TV bosses themselves, won't miss all the Sun TV fun this Deepavali! :)

Sooper!!
My colleague here who is a Tamilian, was elaborating on some of the programs, therefore I could enjoy the post better.

We all will be occupied with the traditional work during diwali and enjoy the festival. Do not forget to give Diwali Greeting Cards to your family members and friends.

Wish u a very happy diwali