Say no, Rita (a review of Zindagi Na Milegi Dobara ...)

(...with brief cameos by DCH and Aranyer Din Ratri)

Zoya Akhtar's Zindagi Na Milegi Dobara, on the face of it, trades similarities with her younger brother's debut film Dil Chahta Hai. Both are about three friends finding insights about their life and their dreams. One of the many things that is common to both is the idea of a road-trip; while in DCH, it is just a pleasure trip, a great way to introduce a good song that lays out the attitudes of its characters, in ZNMD, it is the entire film (i.e. "the journey", lit. and fig.) 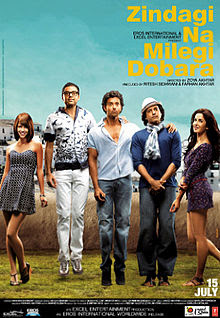 ZNMD is everything people initially accused of DCH of being. We took offence to DCH's nonchalant in-your-face affluence and its carefully coordinated blue-white hues. But as sense and time have prevailed over strangely moral indignation, we recognised in it something deeper: that life can often be complicated; it's not just the poor that have a monopoly on loss, sadness, and the obligations of relationships; and that poor little salad-eating rich slacker boys are human after all. (And it had *that* misdial scene.)

I doubt sense or time will be that kind to ZNMD.

ZNMD is like watching 3 hurdlers preparing to run a race, jostling for position, unsure of whether their legs would be up for the straddle. And then finding all the hurdles missing and the race reduced to a stroll through a lovely park.

ZNMD is a "for loop" of simple computations; where each character is allowed to iterate through his choice of lit. and fig. adventure, with a 100% guarantee of meaningful insight (or the storyteller will refund the money for the trip). In DCH, everyone loses something in their gain: Akash his pride and self-assurance, Sid his lady love, Sameer (presumably) his less complicated self. In contrast, here things unravel themselves in such technicolor hunky-dory-ness that you think that had they continued in Spain or gone to Greece for another week, the Eurozone debt crisis would have resolved itself with a shower of gold from the heavens. 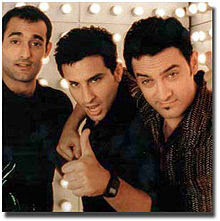 Great plots demand conflict; they demand that its characters suffer. By all means, fling resolutions at them in the end, but put those hapless story puppets through the wringer. In ZNMD, even the potentially embarassing and revelatory meeting with a lost dad ends up being highly underwhelming. Hearts are purged of fear all too easily, love is discovered and conquered with ease, embarassments dissolve at the first sight of daylight. In short, the day is short and begging to be seized without a fight. So why should that interest me?

ZNMD is a visit to the nearest convenience store, where distress turns out to be the inability to find fresh Shiitake mushrooms, conveniently resolved (or your money back, remember) by finding it in the hands of a pretty girl in the neighbouring aisle, who decides she is willing to walk with you into the sunset (or out to the parking lot) forever.

And there's not even a queue at the payment counter. Cease the day.

Post Script: Earlier the same week, I saw Satyajit Ray's "Aranyer Din Ratri". Strange as it sounds, there are parallels to be drawn between these two films. In both, a set of friends decide to escape into less familiar, more natural environs. There they have experiences that change them fundamentally. Both sets find and lose love, and both are principally character-driven plots. 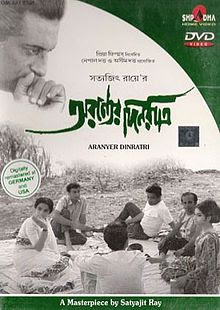 But see how, in the hands of a master, the characters are deeply revealed to us, how life is revealed to be complex but worth engaging with, where loss is balanced with insight. All this without, IMO, being any less entertaining. All images from Wikipedia
at 3:28 PM
Email ThisBlogThis!Share to TwitterShare to FacebookShare to Pinterest
Tags: films, hindi films, reviews

The convenience store comparison is a pretty accurate and funny one!

I did like the poems narrated by Farhan Akhtar throughout the movie apart from the songs. There ends my high points in the movie.

actually, I found the poetry a little juvenile :P - shocking that Javed Akhtar gets away with such things in movies.

Couple of scenes were good, but overall, too much easy-going in all depts.

The Akhtars would have had the same view about their own product ;) but when you are aiming at the coffers, you lay it out easy. Give the audiences just enough conflict to keep their grey cells engaged but not go too far (fearing alienation). I guess it isn't easy straddling the mainstream yet niche road.

That apart, how I wish the DCH part weren't just a cameo :) What a wonderful take! Superb. It defines *fresh* even after a decade and remains one of the most entertaining, elegant, classy, rocking debuts.

Is it too much to ask you for a full version of the Dil Chahta Hai review?

Santosh: thanks for this; I think the other factor in underplaying the whole thing so much was the reception to "Luck By Chance" (which I have yet to watch, and need to remedy that at the earliest), where I hear ZA made the kind of movie she believed in wholeheartedly.

I actually have a post on the decline of S-E-L bubbling away; a decade since DCH, and such disappointment of late. Hopefully, that will lead me back to DCH.

Nice post. I actually noticed the privilege part in DCH much later, on repeated viewings. Was that really something that irked people early on?

S-E-L's decline has been shocking. It was only 3 years ago they did the outstanding Taare Zameen Par, and it now seems like aeons ago.

And yes, LBC is worthwhile. It's a gem of a small film.

Yes, I know a few people who were putt off by "these rich boys". I think most, if not all, eventually saw past it, for the film it really is.

Ajay, I was (famously) one of those who was 'offended' by the rich boys but did manage to see past it.
I thought the underwhelming-ness of ZNMD was deliberate and liked it.

LBC is a very good film - must watch.

S-E-L : was always of the opinion that they used and re-used a limited list of pieces of music, so don't feel the same sadness as you guys :)

Aranyer Din has been on my to-watch list for some time now.
Ray was a master technician.I don't get as impressed by his films as a whole as I am by his quality of production.


Enough of disagreements for the day?

Harish: separate post needed for addressing the Ray aspect (I have been watching a lot of his films of late, and have some points to make). Rest is hardly a disagreement, unlike a decade ago! (and since NP is here...)

Niranjan: I think ZNMD is a perfect film (only a decade later) to throw some DCH-affair-like tomatoes at; (how fitting that there is such a scene in the film :-) - I wonder what SM made of its Rotten T score!)